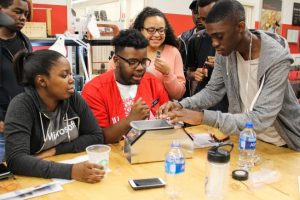 With more 31,000 members in the United States and abroad, the National Society of Black Engineers may be one of the largest student-run organizations in the world.

Since 1975, it has been carefully constructed to increase the number of black engineers who excel academically, succeed professionally, and positively impact the community.

UCF’s chapter of more than 90 members balances numerous volunteer events, two meetings a week, five to six projects a semester, and eight competitions and three conferences each year, in addition to already rigorous course and workloads. While it is a time commitment, members gain a strong network and tools for success.

“Being a black engineer is a dynamic that a lot of us bond over because it’s not as common,” says Kaila Jones, junior civil engineering major and UCF’s chapter president. “The organization teaches us how to carry ourselves so we don’t succumb to [the pressure of] stereotypes [and] so we not only graduate with a degree — we graduate with the skillsets that we need to get a job.”

NSBE members are often able to do well academically because their active participation with the organization reinforces what they’re taught in the classroom through hands-on applications. Many of the group’s meetings even serve as study sessions.

“After joining NSBE, you realize how many members are actually in your class,” says Melissa Dugas, a junior industrial engineer and NSBE secretary. “So it’s like an automatic study group. You have equals if you’re struggling in a subject.”

Weekly meetings provide members with practices to develop the professional skills through audience-based interviews, resume review and debate sessions. During 70 percent of these events, employees from major engineering companies, such as Northrop Grumman and Duke Energy, visit to give members an inside look at the engineering industry.

“Our last GBM (general body meeting) had a panel for private industry versus government, and I felt that spoke out because it helped to describe what it was like to work in those industries,” Dugas says.

In addition to developing multidisciplinary projects, such as a thermoelectric generator, the NSBE’s TORCH (Technical Outreach and Community Help) chair, junior Julian Alexander, organizes community-service events focused on pre-college initiatives. These activities are aimed toward getting kids from elementary to high school interested in STEM.

In the fall, the mechanical engineering major put together the annual Walk for Education, during which members went door-to-door in underserved neighborhoods to give children information on how to prepare for college. They also invited them to a park to enjoy some fun STEM activities, such as making slime, volcanoes and moving a hydraulic arm with syringes and fluids.

“[The goal is to] have them exposed to the science aspect of things and maybe not just think ‘Oh this is a project I have to do once a year for a grade,’ but instead, ‘Oh this is a cool project that will expose me to opportunities that will get me further in the science field,’” Alexander says.

Not only do current NSBE members at UCF extend a helping hand to others, alums from the program often dedicate their time and efforts to helping undergrads who are still finding their way.

Cimarron Carter ’14, a systems engineer for Lockheed Martin and the chapter’s executive advisor, always tells students to include their NSBE experience on their resumes because he’s seen first-hand how it influences their chance of landing a job.

“I have people all the time who are managers at Lockheed Martin right now who come to me and say, ‘Hey, do you know this person? They applied for an internship and they’re currently a NSBE-UCF student,’” says Carter, who earned a degree in information technology. “NSBE-UCF and NSBE in general have such a large network that there’s always bound to be somebody who’s working at a company that you want to work for who was probably in NSBE before.”

Next month, thousands of members across the nation will gather in Pittsburgh, for the annual national convention. They will apply academic abilities to complete challenging projects, use professional skills to network for internships and jobs, and connect with a community to serve others in need, all while supporting fellow black engineers.

At last year’s conference, an NSBE graduate living in Tennessee handed Jones his business card and told her to call him if she ever needed anything.

“Having that type of support, having that type of motivation is definitely what keeps me going in college — knowing that one day I’ll be at a conference in 10 years telling another college student, ‘You got this. You can do it. Here’s my business card if you need anything,’” says Jones.