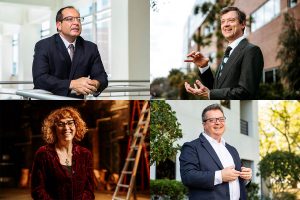 Ronald DeMara, a professor in the UCF Department of Electrical and Computer Engineering, has been named a Pegasus Professor, the highest faculty honor at the University of Central Florida.

He is one of four world renowned researchers and respected teachers selected for the award that honors faculty who are exceptional in every area — teaching, research and service. These awards are determined by the president, and recipients receive a $5,000 stipend and a $5,000 research grant.

The College of Engineering and Computer Science now has 17 Pegasus Professors.

Join the UCF family in getting to know the 2020 recipients who traditionally are announced on UCF’s Founders’ Day, which was scheduled for today but canceled because of coronavirus precautions.

Professor of Electrical and Computer Engineering

“Knowledge provides the opportunity to contribute.”

Ron DeMara joined UCF in 1992, fresh from his doctoral program after previously working at IBM as an electrical engineer. At the time, UCF was one of the smaller universities in the United States with a graduate degree program in his field of microprocessor hardware design. His research since then has centered on making computer chips more compact, reliable and greener. Microprocessors are ubiquitous today, fulfilling vital roles ranging from thermostats to robotic vacuums.

While DeMara has had international success with his research, he is innovating ways to help students learn.

“I created an infrastructure called the Evaluation Proficiency Center so students can take their exams online, giving graduate teaching assistants and faculty more time to help tutor,” DeMara says. “Our GTAs used to spend 10 to 20 hours a week grading stacks of paper, but now we can reallocate their time back to helping students.”

What began in his course has been expanded to 30 other courses, helping students get more face time with their professors and teaching assistants they need to succeed. His research project was recently awarded $1.8 million by the National Science Foundation to expand this concept. Michael Georgiopoulos, dean of the College of Engineering and Computer Science, says DeMara is a professor who focuses on all students.

“He is going to leave the legacy of a professor who really cared about his students,” Georgiopoulos says. “His impact also goes beyond the students in his own classroom, but onto the students of the faculty who use the Evaluation Proficiency Center.”

Georgiopoulos believes DeMara has the ability to take his idea nationwide. It’s not every day that an engineer advances the field of education, but it’s clear that is what motivates DeMara. Out of his 50 students he’s mentored to attain master’s degrees or doctorates, 10 became professors themselves, including one who is dean and another who is a department chair.

“Being a teacher is fun and intrinsically rewarding. It’s fun to explore new ideas and help people,” he says. “I’ve and seen my students 20 years later with their families. We remember each other and it’s wonderful to know that you made a difference.”

Professor of Physics and Planetary Science

“Reach for the planets.”

Joseph Harrington is an internationally renowned planetary scientist and a key member of UCF’s Planetary Science Group. His research centers on exoplanets, or planets that orbit stars other than the sun. He also has an asteroid named after him: Joeharrington.

“Once I got here, the research group I founded made the first separate detection of day and night on an exoplanet and the first detection of disequilibrium chemistry on an exoplanet, which is a potential sign of life,” Harrington says. “We developed the methods we will use to detect life, once we have telescopes powerful enough to make the right measurements of planets that are hospitable to life.”

His work has been featured on the cover of the journal Science and has had several publications in Nature, bringing worldwide publicity for UCF. But his love for astronomy had humble beginnings.

“My grandmother couldn’t sleep. So she subscribed to an astronomy magazine and learned about the sky. She would take me out on the porch and point out the stars and planets,” Harrington says. “It was her energy and grasping of life that I really admired. My father is a nuclear engineer. I asked questions about everything, and he answered them all. He taught me all about protons, neutrons, fission, and fusion at a really young age. So now I’m a physicist and a planetary astronomer.”

He knew in sixth grade that he would get his doctorate and be an astronomer.

His teaching philosophy recognizes that students enter a competitive job field, and his goal is to put them at the top level.

“He is a dedicated teacher who has continually added to and developed a strong curriculum in the Planetary Science degree track in our Physics Ph.D. program,” says interim dean of the College of Sciences, Tosha Dupras. “His goal is to make it one of the best programs in the world, and that’s what he’s doing.”

College of Arts and Humanities

Julia Listengarten is a theatre professor in a league of her own. Not only does she create and direct theater performances, she also writes about contemporary playwriting and theatre making — she’s published four books and over 20 articles in leading peer-reviewed journals.

“Julia is very diverse in her commitments. She has published with major journals but still has time to ‘run things’ at Theatre UCF,” he says. “She’s never satisfied with the status quo and cares deeply about the program and our students. She always goes the extra mile.”

While Listengarten says seeing her students up on stage is her biggest joy as a professor, she’s also been involved in two large, collaborative projects: Pegasus PlayLab and the Arts and Aging project. She began Pegasus in summer 2018 as a national festival to showcase new and emerging playwrights. Arts and Aging is a funded project to research the benefits of art to people with dementia and their caregivers.

Her passion for teaching comes from her mother who was a conservatory music professor for 40 years.

“I grew up surrounded by her students and observing her love for the arts and passion for teaching, and it was contagious,” she says. “I didn’t realize it back then, but it’s had a huge impact on me and it continues to. I report to her all of the time and share my passion with her.”

“Virtual reality has long been a dream. Finally, it is a reality.”

Gregory Welch is not a nurse, he is a computer scientist and engineer. So why is he in the College of Nursing? Dean Mary Lou Sole has called his appointment an “experiment.”

“He was our first faculty to be a non-nurse,” Sole says. “What would a computer scientist bring to us? He brought us his computer science knowledge to help us address clinical questions related to healthcare.”

One of those needs was how students practice on patients. It’s important for students, whether they are studying to become nurses or physicians, to learn how to interact with patients, and to diagnose things such as a stroke. Welch and his team developed the very first physical-virtual patient.

“It looks a little bit like a department-store mannequin, but it has dynamic imagery of the patient on it. The patient will look at the provider, talk and exhibit various emotions. The provider can diagnose the simulated patient much like a real patient by taking their pulse, checking their forehead for an elevated temperature, pulling down on an eyelid, or palpating the abdomen.” Welch says. “It’s something really exciting that could be readily manufactured by a company from readily available components. The technology isn’t highly complex—it’s the idea and the combination of things that have a powerful effect.”

Seemingly distant from his current work, Welch started out his career in the music field as an audio engineer in Brooklyn. When he realized he wasn’t happy, he quit and wound up with a job at NASA’s Jet Propulsion Laboratory working on the Voyager project.

“My mother was a mathematician and a computer programmer in the 1960s at the Argonne National Laboratory,” he says. “I always admired her analytical thinking and perseverance. My father was a professional musician who studied with Aaron Copland, and both managed and played in the Chicago Symphony Orchestra. He was very gregarious — I saw how he interacted with people and how they would light up. My parents have shaped me in so many ways.”

Welch brings his love of big ideas and his down-to-earth personality into the laboratory and the classroom. Sole describes Welch as the Energizer Bunny, constantly seeking new ideas and finding ways to achieve them.

“I hope my students leave UCF with the excitement to carry out research, and the skills to investigate and communicate,” Welch says. “Professors are fortunate in that we have full-time jobs that allow us to think broadly and deeply about a variety of societal challenges. I do not take this for granted — like many I work very hard to make the best use of this privilege.”