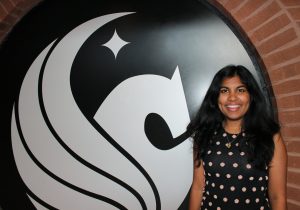 Catherine Ninah, a senior majoring in Industrial Engineering, is one of 21 students inducted into the University of Central Florida’s prestigious Order of Pegasus, the university’s highest student accolade.

The project manager intern at Siemens has proved herself to be one of the university’s top performing students. Previously she interned at Dell and Duke University’s Center for Environmental Implications of Nanotechnology.

“It’s incredibly humbling to receive the most significant and prestigious award,” said Ninah, who was notified of the award on Feb. 13. “I’m truly grateful to be honored and recognized for my work on campus and throughout the greater Orlando area.”

She’s held strong to a nearly 4.0 grade point average throughout her college career, while holding numerous leadership positions across campus and has left a resounding impact on the local and national community. In 2015 she was recognized as Researcher of the Month by The Burnett Honors College, and in 2016, she was recognized as an innovator by the Clinton Global Initiative for her project Food, Energy, and Water Nexus as an Art.

In October 2016, Ninah was awarded the renowned Astronaut Scholarship from the Astronaut Scholarship Foundation, which recognizes the top 40 STEM students in the U.S. Ninah also has been recognized as a scholar by Boeing, Crane Manufacturers Association of America, Society of Women Engineers, and the Material Handling Institute.

Ninah has served as an undergraduate representative for Posters at the Capitol, an event that allows students to meet with legislators to discuss key issues pertaining to the UCF student body and higher education in Florida.

Ninah’s impressive track record for research goes beyond the walls of the classroom and tackles real-world issues facing society.

“She is excited about the research and brings creative and relevant ideas to the project,” said Debra Reinhart, UCF assistant vice president for Research and Commercialization. “Clearly, research is a passion of hers, as you can judge by the many research programs she has participated in during her short academic career.”

For her senior design project, she and her teammates were tasked with helping prepare for a manned mission to Mars to test the sustainment of civilization on the planet for NASA’s Kennedy Space Center. Ninah and her team created and analyzed the allocation of resources necessary in deploying a fuel station to a foreign soil, helping NASA get one step close to human sustainment on the red planet.

Ninah’s developed her love of engineering at a young age. Her father is an industrial engineer and her mother is a teacher with a computer science background.

“I was extremely privileged to grow up with such great parents and a firm understanding of their careers because, from an early age, I was exposed to science, technology, engineering and math,” said Ninah, who was with her mom when she received the official award letter in the mail. “I think that’s really fostered my love for engineering and overall curiosity and determination to  make an impact, and helping solve some of the world’s most complex problems.”

The middle and high school valedictorian, who began conducting research during her sophomore year, has worked on several research articles and posters during her time at UCF. She’s presented at a handful of conferences over the last four years to bring attention to the university’s efforts in the science and engineering fields.

“When I came to UCF, I saw how I could make a difference as a woman in STEM,” said Ninah, who teetered between biology and engineering during her first semester. “I got an Industrial Engineering internship, and once it was over, I knew that’s what I wanted to do. I saw the impact I could make because Industrial Engineering gives you problem solving, systematic thinking to take on any problem in any industry and that really excites me.”

The University Honors program student has been an active participant in the National Science Foundation Spring STEM Academy sponsored by the UCF Office of Undergraduate Research, Research and Mentoring Program and the ICubed program. Through her volunteering and social outreach with these programs, she’s been able to apply those problem solving and systematic thinking skills to real-world problems for nanotechnology purposes and decision-making with the Environmental Protection Agency to reduce food waste by up to 50 percent.

“Who would’ve thought that out of 70,000 students, I’d be the one holding this letter,” said Ninah. “I’m beyond honored to be recognized with this award and it is a testament to my hard work, help from God, mentors, friends and family and dedication to advancing UCF’s efforts in Industrial Engineering.”