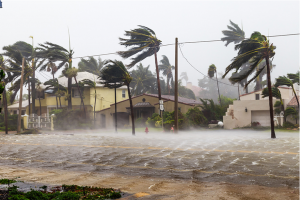 For communities in the crosshairs of rapid urbanization, climate change and natural disasters, the best defense may be making sure the systems they rely on for food, energy and water are resilient, less dependent on regional systems and take full advantage of new green technology.

University of Central Florida engineering Professor Ni-Bin Chang is leading an ongoing international study, which is examining how Miami along with Marseille, France, and Amsterdam, Netherlands, handle their urban infrastructure systems and whether a strategic sustainable development approach related to a food-energy-water nexus will work together in such diverse landscapes.

The project, known as ENLARGE or “ENabling a LARGE-scale adaptive integration of technology hubs to enhance community resiliency via decentralized decision support in various urban food-water-energy nexuses,” is being administered by the Belmont Forum, and is supported by a $2 million grant from the National Science Foundation, the Netherlands Organisation for Scientific Research, and the French National Research Agency. The Belmont Forum is a partnership of funders and science councils that promotes international, transdisciplinary research. UCF has received approximately $750,000 of the grant to work on the project from the NSF. The research is expected to be finished in 2021.

“As we know, the world has been experiencing the largest wave of urban growth ever, and sustainability has been a big concern across the globe,” Chang says. “Food, water and energy infrastructures are highly interdependent and interconnected, and the failure in one sector could cascade to other sectors and paralyze the whole community. This study will offer a deeper understanding of ways to increase urban sustainability from different perspectives in Europe and North America.”

For each city, researchers are looking at the local resources available, as well as new technology and methods at different scales that could be brought in to improve the community resilience of food, energy and water supplies. Then researchers will look at the implementation of existing, emerging and potential technologies to examine their cost, benefits, and risks related to food, water and energy production in each city, taking into consideration their different socioeconomic conditions, governance structures and cultural contexts.

These technology hubs could include urban farming, water filtration, solar power, windmills, energy storage, low-impact development, stormwater reuse and more, and the idea is to make communities self-sufficient in an urban environment and not necessarily dependent on resources from the outside.

“We envision that if the synergy of a suite of community-scale food, water and energy sectors can be proven effective in terms of resilience and sustainability, then in the event of a hurricane or other natural disasters, the community can be back to the normal level much easier and faster,” Chang says.

For example, with some communities generating their own energy from solar panels on their homes’ rooftops or through wind towers, energy could be more quickly restored even if regional power outages linger. As long as smart microgrids could be activated, urban farming could be resumed quickly thanks to local green power.

Another possibility is something Chang and Martin Wanielista, a UCF professor emeritus, developed to help clean water. The team developed a bioactivated absorption media known as BAM. It is a mix of natural and recycled materials that can be used to remove and recover nutrients, such as nitrogen and phosphorus, from stormwater runoff and wastewater discharge generated by farms, ranches, golf courses and lawns. Preventing this nutrient runoff would help mitigate the toxic algal blooms and red tide outbreaks that can plague Florida’s waterways. Spent BAM may be reused as soil amendment in support of agricultural crop growth.

The invention, through nine U.S. patents and BAM’s successful commercialization, is the major reason Chang was named a fellow of the National Academy of Inventors this past Spring, and why he is a recognized leader in this area of research.

Co-investigators of the project are Md. Uzzal Hossain, Wei Zhang, and Andrea Valencia with UCF’s Department of Civil, Environmental and Construction Engineering; Qipeng P. Zheng and Mengnan Chen with UCF’s Department of Industrial Engineering and Management Science; Naim Kapucu and Sean Beaudet with UCF’s School of Public Administration; Philip Fairey and Lixing Gu with UCF’s Florida Solar Energy Center; Jiangxiao Qiu with the University of Florida’s School of Forest Resources and Conservation, Zhong-Ren Peng with the University of Florida’s Department of Urban Planning; Chelsea Kaandorp, Edo Abraham, Marie-Claire ten Veldhuis and Nick van de Giesen with Delft University of Technology in the Netherlands; Bruno Molle, Severine Tomas, Nassim Ait-Mouheb and Deborah Dotta with the National Research Institute of Science and Technology for Agriculture and Environment in Montpellier, France; Rémi Declercq, Martin Perrin and Léon Conradi with ECOFILAE in France; and Geoffrey Molle with ECOSEC in France.