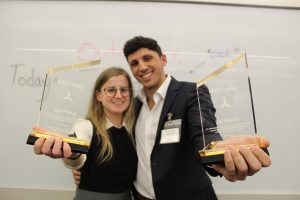 The competition, held in Austin, Texas, was organized by National Society of Sales Engineers (NSSE) and hosted by industry sponsors, including VMWare, Timken, Nutanix, Lincoln Electric and Trane. Teams were tasked with selling a product to company using both technical knowledge and soft skills, armed only with a case study received a week before the competition. Over a series of three meetings, teams role-play with an internal account manager from the company they represent, as well as the CIO and CTO of the company to which they are trying to sell the products. They are judged by how effectively they can build rapport with all parties, understand the needs and objectives of the company, collaborate with their counterparts to develop a solution, and ask for the sale.

Currently there are 50 members in the UCF SSE chapter, advised by industrial engineering and management systems associate instructor Mark Calabrese. The group meets twice weekly to prepare for competitions.

The competition experience can be a nerve-wracking one, says UCF SSE president Francisca Freire.

“You walk into a room where you will have the meetings, and after two minutes, you have to walk out and come back in again in character,” Freire says. “You are no longer a UCF student at a conference, rather you are a sales engineer meeting with a new client discussing potential needs and offering a solution.”

Engineering knowledge combined with sharp selling and persuasive communication skills can fetch top salaries in industry, where the average salary, according to the Bureau of Labor Statistics, is just over $100,000.

The skills SSE chapter members are gaining, however, are invaluable, regardless of what career they decide to pursue.

UCF alumni Ted Kursevicius, ’18 Computer Engineering, and Sam Belcastro, ’19 Computer Science, both software engineers for Microsoft, said the expertise they gained as former members of UCF’s SSE were instrumental to their careers today. Although neither pursued sales engineering as a career, they believed so strongly in the value of their chapter experiences that they spearheaded the creation of NSSE. Both volunteer their time and talent to the organization: Belcastro serves as NSSE president, and Kursevicius as its treasurer. The roots of the organization come from a pure passion for the field, Belcastro says.

“We define sales engineers as the intersection between business, communication and engineering,” he says. “NSSE has a greater vision to advance the sales engineering community. Our mission is to create a community of the world’s greatest problem solvers to face tomorrow’s toughest challenges.”

Kursevicius says his believes his SSE experiences are the reason he successfully interviewed at Microsoft, and that SSE members are trained to be confident, curious and personable.

“Sales is difficult. You have to build trust with counterparts who are start off distrusting you by default. You have to work with them to solve challenges, and in that, you must be both genuine and diplomatic. You have to listen to the people you’re working with and truly understand their point of view. Then, you have to convince them that the solution you want is the one that’s in their best interest,” Kursevicius says. “It turns out that all of these skills are important in any role, not just sales.”