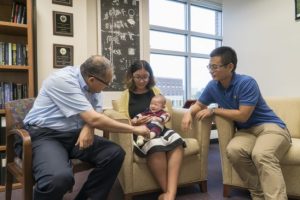 It was Abdel-Aty who convinced each stellar graduate student to attend UCF so they could contribute to cutting-edge transportation engineering research being conducted in his lab. They arrived separately and when they met, they knew they were destined for a life together.

“In my first visit to UCF, she walked in the room with cookies from Beijing to share with our colleagues – that was the first time I laid eyes on my sunshine girl,” said Cai, who came to the United States from the Jiangsu Province, about 125 miles from Beijing, three years ago. “I knew she was the one.”

“I still remember what he was wearing: a polo shirt with a navy-blue coat,” Wu said. “I just met him but I remember feeling an instant connection to him.”

They ended up working together on projects in Abdel-Aty’s lab and were married in March 2016.

“In my 22 years of teaching, I’ve never had something like this happen,” Abdely-Aty said. “I’d seen them holding hands around campus before, so when they came to tell me, I already knew there was some chemistry.”

A little less than a year after getting married, the couple welcomed a baby boy. They named him Atticus, in part, after Abdel-Aty.

“We really respect Dr. Aty and want to express our gratitude to him,” Wu said. “Although we (Cai and Wu) both came from China, our hometowns are far from each other, and we might never have met if it weren’t for Dr. Aty.”

Abdel-Aty said he was surprised and honored that the 3-month-old was named after him. A picture of the baby and himself sits on his desk alongside one of Cai and Wu’s wedding.

“I’m a bit of a father figure to them so to find out that they named Atticus after me is very special,” Abdel-Aty said. “I always tell them that in the absence of their parents, I’m here for them.”

Meanwhile the couple continues to focus on advancing transportation research.

They conduct research about traffic safety specifically related to driving in foggy weather conditions. Wu said working with a spouse is beneficial to their academic and career-driven success.

“The funny thing is that sometimes when we are taking care of the baby together, our topics can switch from the baby back to research,” Wu said.

The couple also is learning to balance studies with parenthood.

“It’s not easy to pursue a Ph.D. but they’ve made it work,” said Abdel-Aty, who asks Wu to bring Atticus in for a visit any time he comes to campus.

Cai and Wu said they will be forever grateful that Abdel-Aty gave them an opportunity to come to the United States to pursue their intellectual passion and that he has been such a great mentor and friend.

“Because of us, and because of Dr. Aty, Atticus will have more chances to learn about engineering,” Wu said. “Ultimately, we want him to grow up and become a brave, honest, and intelligent individual who pursues his own passions in life.”