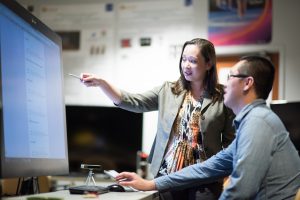 The iUX Academy is an integrative learning initiative that provides students real-world practice in User Experience, or UX, through partnerships with local industry.

“I am honored to receive this award that recognizes faculty who push boundaries and shift paradigms,” Wisniewski says. “It is only though innovation that UCF will achieve its Collective Impact.” The award is one of the university’s most prestigious internal recognitions, celebrating innovative ideas that have been developed into impactful, scalable programs that align with UCF’s Collective Impact Strategic Plan.

The iUX Academy provides students hands-on, practical training by allowing them to consult for local industry. UX encompasses everything from the attitude a person has toward a technology-based product or service to the overall experience interacting with that technology. Everything associated with that interaction — from core functionality and interface design to ease of use and even societal impacts of that technology — is methodically studied and designed by a UX researcher to maximize the overall end-user experience.

“When I first came to UCF, there was a gap in education for students who were interested in UX careers. The iUX Academy was established in Spring 2016 to fill this gap,” says Wisniewski. She says the project  began after Bogen Communications, a local company, contacted her about conducting usability testing for a new software product they were developing. “I saw this as a great opportunity for UCF to partner with local businesses to create integrative learning opportunities for our students.”

Wisniewski says the program not only educates students that UX is a viable and lucrative career path, but also gives them the critical competencies sought by employers.

The iUX Academy also helps establish UCF as a source of high-quality UX talent for local companies. Since its inception, the program has given more than 30 students the opportunity to gain paid work experience with local industry partners, including Bogen, Peraton and Medi-Iot. Following their participation in the program, students have been placed at Fortune 500 companies such as Deloitte, FedEx and HP.

Marchioli Award recipients receive a $5,000 grant as part of the award, which Wisniewski says she will use to expand the program. She plans to use the funds to hire a part-time iUX Academy lab manager for now, but with the continued success of the program, she says that position will eventually become a full-time role.

“We have more opportunities than the bandwidth to pursue all of them,” Wisniewski says. “A full-time lab manager would allow me to scale the iUX Academy to UCF-level greatness. At UCF, we like to go big, and that is what the iUX Academy intends to do.”

Details about the iUX Academy can be found at its website, including information for students interested in participating as well as companies seeking UX design consultation.