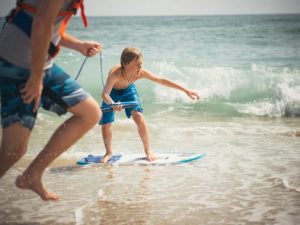 With an idea to create a new watersport based around skimboarding and a distribution deal lined up with Ron Jon Surf Shop, senior Matthew White took second place and $3,000 at the third annual Governor’s Cup Pitch Competition at Florida State University on Friday. The new-business-venture competition featured top-performing collegiate startups from nine universities across the state.

White’s company, Mainland Tow, won with a new piece of beach gear called the “Skimvest.” It allows the wearer to run along shallow water while towing a person behind on a skimboard. The electrical engineering major modeled the device after a baby carrier he found at a garage sale.

“At first, my friends and I tried to tow someone on a skimboard with a bunch of T-shirts tied together, but that didn’t really work,” White said. “One day, I was at a garage sale and came across a baby-carrying harness, bought it for $2 and thought I could definitely use this to tow someone down the beach.” The full-time student plans to use the winnings from the competition to cover manufacturing costs for the first 100 units. After creating several product revisions and patenting the Skimvest in the United States, White set up a distribution deal with Ron Jon Surf Shop following a chance encounter with the company’s general merchandise manager at a beach in 2015

“I met him while putting on sunscreen during an event on Cocoa Beach,” White said. “After months of phone calls, he agreed to meet with me and was really excited about the Skimvest.”

The competition, which was organized by the Roundtable of Entrepreneurship Educators of Florida, featured outstanding student venture proposals and gave competitors the chance to pitch their ideas to a panel of qualified professionals. Cameron Ford, director of the UCF Center for Entrepreneurial Leadership, described the competition as a showcase for the best collegiate startup proposals in the state.

“Matthew worked extraordinarily hard on multiple startup venture ideas over the past few years with our staff at the Blackstone LaunchPad and Upstarts Student Venture Accelerator,” Ford said. “We chose him to compete to reward his hard work and achievement.”