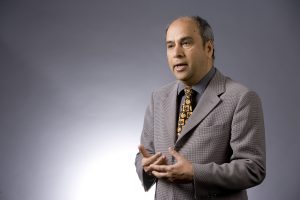 University of Central Florida’s renowned computer science researcher Mubarak Shah, Ph.D., has been named Fellow of the National Academy of Inventors for his innovations in the field of computer vision.

Shah, who is the UCF Trustee Chair Professor of Computer Science and Director of the Center for Research in Computer Vision, is being recognized for his significant technical contributions and inventions in computer vision: a science that uses complex algorithms to quickly and accurately perform computerized tasks such as facial recognition, mass-crowd counts, or detecting and identifying anomalies in images.

Shah is UCF’s 13th NAI fellow, an honor given to those who have made a tangible impact on quality of life, economic development and the welfare of society. It is the highest professional accolade given to academic inventors. Shah holds eight patents in computer vision technology licensed to four companies.

His pioneering work in the field of automated video analysis, in collaboration with the Orlando Police Department, resulted in the KNIGHT surveillance system, which was installed in downtown Orlando.  KNIGHT detects and tracks moving objects, reporting significant changes in events and activities to officers for further analysis, to give officers a new way to monitor and analyze crime-scene surveillance video footage.

Shah also developed software that calculated the world’s first automated mass-crowd count. It was first tested in 2015 by analyzing aerial photographs of protests in Catalonia, Spain, producing a count of more than a half-million people in 30 minutes. In the future, Shah says, the technology will be used to count crowds at the Kaaba, a religious site in Saudi Arabia, during the Hajj pilgrimage to Mecca. It also may be used to help monitor crowds at the 2020 World Cup in Doha, Qatar.

Shah’s teams have conducted groundbreaking research to advance facial recognition technology. Kairos, a Miami-based company, licensed a novel algorithm by Shah and his team that performs video face recognition, identifying the same face from multiple video sources. His team also has developed a facial recognition tool that rapidly matches pictures of children with their biological parents to identify images of missing children as they age.

“This is exciting time for computer vision research in particular, and artificial intelligence in general,” says Shah. “Due to deep neural network learning disruption, we are able to solve problems today we never thought we would be able to. Computer vision is being used in medical image diagnosis, self-driving cars, manufacturing, video surveillance for safety and security, biometrics, and more.”

Shah earned his doctorate from Wayne State University. In 1986, he joined UCF where he established the computer vision program, now ranked in the top five in the United States and among the top 10 in the world. In 2006, he was honored as a Pegasus Professor, UCF’s highest faculty award. With more than 50,000 citations and h-index of more than 100, he is among the top 100 cited authors in Computer Science.