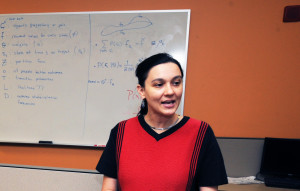 The associate professor has been appointed to the Information Science and Technology study group for the Defense Advanced Research Projects Agency (DARPA).

Sukthankar specializes in robotics and giving computer-based agents human-like levels of decision making. She will joint 30 of the brightest scientists and engineers in the nation on the advisory panel. The group meets three times a year to discuss new research developments in computer science and to advise DARPA on future information technology funding priorities.

The group helps alert DARPA to new breakthroughs by promoting interdisciplinary conversations between researchers working in different areas of information science, according to Sukthankar, who is the first UCF faculty member to serve in this role.

Sukthankar is a recipient of a National Science Foundation CAREER award and the Air Force Office of Scientific Research Young Investigator award. In 2015, she received UCF’s Reach for the Stars award which included a $10,000 annual research grant for three years.

She has published dozens of articles on cutting-edge topics such as crowdsourcing sensor data, agent-based social simulations and models for human-robot interaction.