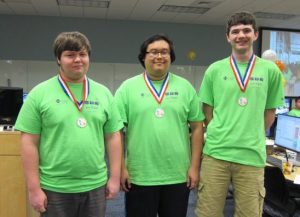 For the sixth consecutive year, a computer programming team from UCF has advanced to compete in the top collegiate programming contest in the world, to be held next April in China.

Buzzelli, of Palm Bay, and Coleman, of Oxford, PA, are repeating from last year’s UCF team that finished 13th at the international competition and was the highest ranked team from the United States.

Out of the 40,000+ students and 13,000+ teams from more than 100 countries that began the competition this year, 128 teams are expected to meet in China to test their programming skills. UCF previously has finished 2nd, 4th and 5th at the world finals.

Teams work on a single computer to solve a set of real-world problems. The competition combines logic, strategy and mental endurance to design tests and build software systems to solve the most problems.

“In five hours there were 11 problems. They solved 10 of them,” said computer science Professor Ali Orooji and faculty advisor for the team.

Buzzelli said the team had a tough time at first figuring out some of the solutions. “However, we were prepared for this, took a step back, remembered all of our thousands of hours of training, and came back in the latter half of the contest,” he said.

Now the preparation starts for the world finals.

Buzzelli said the team’s motto and secret of success under coach Arup Guha this year is “Discipline and properly directed effort maximize talent.”

“To prepare for world finals we will be practicing rigorously in two major ways,” Buzzelli said. “First, we will participate in online contests and solve problems individually. And second, we will work on team strategy each week with our coaches as we aim to perfect our strategy to be prepared for everything,”

“Problem writers will always be able to create novel problems, but the more old problems you can relate them to, the easier they will be to solve,” he said.

In the 36 years the teams have entered the competition, UCF has finished among the southeast region’s top three teams each year, including first place 20 times.

“Our record is matched by no other school in our region,” Orooji said.