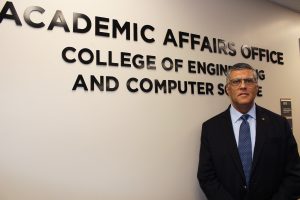 The academic operations of the University of Central Florida’s College of Engineering and Computer Science – one of the largest colleges of its kind in the nation – will have a new leader this week when Prof. Manoj Chopra becomes the college’s interim associate dean for Academic Affairs, announced Dean Michael Georgiopoulos.

Chopra, a professor in the UCF Department of Civil, Environmental and Construction Engineering, will assume the role on October 18, replacing Prof. Charles Reilly, who will become UCF’s assistant vice provost after serving as the college’s associate dean for Academic Affairs since 2009.

Chopra will lead all academic operations of the college, with a student enrollment of more than 11,500, in an interim capacity while the college undertakes a search for a permanent associate dean. He will oversee the college’s Academic Affairs Office, which handles student advising, faculty teaching, scholarships, degree conferment, space and facilities. The office has 15 academic advisors and support staff.

“It’s a great time for our college with the wind in our sails,” Chopra said. “My goal is to create an environment of support for the success of our students and faculty. It is important that this transition be smooth and seamless, and I hope to build on my experience in interacting with the faculty and mentoring of students, to provide leadership for the critical academic operations of the college.”

Chopra has held numerous leadership positions in the college and for the university since joining UCF in 1993, including serving as associate chair for the Department of Civil, Environmental and Construction Engineering, and as director of the UCF Stormwater Management Academy.

He is the university’s Lead for Research Space for the UCF Office of Research, working on solutions and strategies for the optimal use of limited research space on all UCF campuses.

In 2014, he was selected as a UCF Provost Faculty Fellow to conceptualize and implement the UCF Faculty Cluster Initiative, a university-wide research effort to leverage UCF’s existing strengths with interdisciplinary teams focused on solving pressing scientific and societal challenges.

Since 2012, when UCF President Hitt appointed him as the NCAA Faculty Athletics Representative for UCF, Chopra has served as the liaison between the president’s office and UCF Athletics, responsible for the academic success, eligibility, welfare and development of student athletes.

He served as the Chair of the UCF Faculty Senate and represented the faculty on the UCF Board of Trustees from 2005 to 2009. Subsequently, he was elected by his peers to serve as the faculty representative on the Florida Board of Governors responsible for all 12 state universities. In 2014-2015, he was briefly appointed the Interim Vice Provost for Teaching and Learning and the Dean of Undergraduate Studies. Chopra is a program evaluator for ABET, the Accreditation Board for Engineering and Technology.

His research areas include the study of sinkholes, behavior of soil and foundations, soil erosion and sediment control, and sustainable pavements. He has conducted more than $6 million of sponsored research and has 75+ publications with his students. He shared the 2001 Excellence in Environmental Engineering award by NASA for his patented work in innovative groundwater cleanup techniques. His professional assessment and research on sinkholes have received extensive media coverage in Central Florida and nationally. He has also received several awards for his educational activities, including four Teaching Incentive Program awards, the UCF Excellence in Undergraduate Teaching, and the UCF Excellence in Faculty Advising.