Matthew Wright may be one of the most accomplished special teamers in UCF football history, having made 43 field goals in three seasons with the Knights at a 75.4 percent clip, and finishing this past season as a Peach Bowl champion.

With that kind of precision launching footballs in the air, it may come as no surprise that Wright is studying aerospace engineering.

Wright’s pursuit of an engineering degree is a culmination of a lifelong goal for the Lancaster, Pennsylvania native who always had a passion for the cosmos.

“I realized that math was a strong suit of mine when I was young, and I enjoyed it,” said Wright, 21, a senior who expects to graduate in December. “Growing up, I loved all things having to do with space, so aerospace engineering was a natural choice for me.” 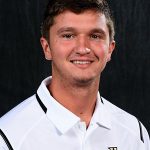 Football and engineering may be an unusual pairing, but Wright said the two have taught him similar lessons about time management, hard work, and communication.

“Engineering has helped me learn how to manage and handle stressful situations on the field by remaining calm and focused,” he said, citing thermodynamics as his most challenging engineering course yet. “It’s also helped me work well under pressure outside of my comfort zone and prioritize my responsibilities to ensure they get completed in a timely manner.”

“I’ve learned to block out distractions when it’s time to get work done so that an assignment that should take an hour does not end up becoming a three-hour assignment.”

Teamwork and timeliness are equally important in football and in engineering.

“The camaraderie of being on the football team translates over to group projects seamlessly because I’ve learned to deal with different personalities in a variety of situations. Football has taught me the importance of being on time and being prepared every time I show up for a practice or game. I apply those same skills in the classroom, which is crucial in a complex subject like engineering.”

Originally a high school soccer player, Wright tried out for the UCF football team when a placekicker spot opened. To his surprise, he landed a spot in the lineup.

Between a rigorous academic course load and the demands of the football season, Wright estimates he spent 40 hours on the field each week at practice, playing a key role in UCF’s history-making undefeated season. Wright made 13 of 18 field goal attempts with a long of 47 yards and also averaged 59.7 yards on kickoffs with 23 touchbacks on the year.

His laser focus has paid off for Wright, noting he’s able to put his best foot forward in the classroom and between the hash marks. And as he gets closer to graduation, Wright hopes his unique experience will help land him a job in the aerospace industry so he can “get to work and make a difference in the world.”