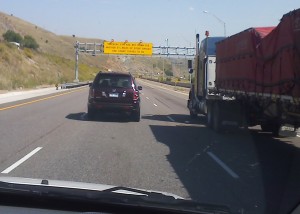 A portion of Interstate 75 soon will become safer for driving in low-visibility conditions, thanks to the recommendations of a study led by Mohamed Abdel-Aty, a professor in the CECS Department of Civil, Environmental and Construction Engineering.

One year ago, a 11 people died and 20 were injured in a multi-car crash on a portion of I-75 near Gainesville that is notorious for low visibility due to fog and smoke.

In the near future, the Florida Department of Transportation (FDOT) will upgrade that stretch of highway with cameras, high-tech vehicle detectors and low-visibility sensors that will connect to a system that can instantly update overhead message signs and alert highway safety officials. The new safety measures are among the recommendations included in the UCF study led by Dr. Abdel-Aty, which examined the effectiveness of systems in place nationwide.

Dr. Abdel-Aty, who is also associate editor of Accident Analysis and Prevention, was quoted in a Jan. 29 news story published by WESH 2 News regarding his study.

He was also quoted in a story published by the Gainesville Sun on Jan. 27. Read the full story below.

(NOTE: The UCF study is mentioned, and Dr. Aty is quoted, in the final five paragraphs of the story).

What has changed since I-75 carnage?
by Cindy Swirko, Gainesville Sun

Jan. 27, 2013 – One year after a series of fiery crashes left Interstate 75 south of Gainesville littered with wreckage that hid the bodies of 11 victims, the Florida Highway Patrol is facing a credibility problem.

The agency has created a new set of protocols to deal with hazardous conditions such as the “superfog” that enveloped Paynes Prairie, turning it into a death trap. FHP believes the new requirements and training will help prevent a replay of the I-75 inferno that occurred around 4 a.m. on Jan. 29, 2012.

The crashes occurred when drivers hit a wall of fog that was dense with particles from a Paynes Prairie wildfire.

Some vehicles came to complete stops in the northbound and southbound travel lanes. Motorists behind them, unable to see beyond the hoods of their vehicles, slammed into them.

The resulting impacts were so ferocious that trailers were completely charred. At least two dozen people were hospitalized for injuries while many others were treated at the scene.

An investigation by the Florida Department of Law Enforcement found that the FHP failed to follow its protocols to maintain safety in hazardous conditions — including those that were established after a 2008 Polk County incident.

The FHP contends that the actions or lack of actions by its troopers were not at fault that morning. In its own report — essentially a response to the FDLE review — FHP blames the drivers for the crashes.
FHP said troopers “acted in a manner which they believed was appropriate and in the best interest of restoring the safe and orderly flow of traffic to the roadways.”

“The Highway Patrol is going to ensure that we take care of anything with the roadways to the best of our ability with the information that we have,” said FHP Capt. Nancy Rasmussen. “I am hoping through all of the training we have had, that it will help. Especially with all of the agencies involved.”

But, for some, those assurances are not good enough.

The FHP took the same approach after a similar set of crashes in fog and smoke on Interstate 4 in Polk County in 2008. An investigation by The Sun last year found that several key mandated steps involving training, revised guidelines and communication among agencies were not completed or were ignored.

Now, attorneys representing the families of the I-75 victims are asking why the public should have any confidence that FHP will do what it is supposed to under the new protocols since an FDLE investigation found that FHP failed to follow key procedures begun after 2008.

“All we can do is hope and pray that they are doing it now,” said Gainesville attorney Daniel Glassman. “This had happened a few years beforehand, and they did an investigation that came up with recommendations about all of these things so this will not happen again. Well, guess what, it happened again.”

******
The state is taking a two-pronged approach in response to the I-75 crashes — training and technology.

FHP has changed its protocols in handling hazardous conditions. It has also provided troopers with more training.

But no troopers have been disciplined for their actions that night. One key player, then-Lt. John Gourley, who ordered I-75 reopened about a half-hour before the crashes began, was promoted to captain and transferred to Pensacola.

Rasmussen said measures have been taken to complete most of the recommendations from FDLE.

For instance, procedures have now been enacted that establish a watch supervisor for each troop and shift-change briefings among the watch supervisors that include electronic debriefing forms. The intent is to ensure that the oncoming shift is fully aware of any fire, smoke or fog issues that arose on the previous shift so monitoring can continue.

FHP has new protocols for entering and closing fire incidents in its computer-aided dispatch system. That may prevent a repeat of inaccurate communications within FHP on the location of the Paynes Prairie fire prior to the crashes.

Rasmussen said troopers now monitor roads in the vicinity of a fire much more closely than they used to.

Depending on the weather conditions, troopers may make periodic checks while on patrol or stay near a particular spot if conditions are likely to worsen.

While FDLE pointed out that protocols resulting from the 2008 accidents were not thoroughly followed last year, Rasmussen said no review procedures were created to try to ensure troopers are following the new policies.

“We expect our troopers to act professionally and do what they are supposed to do. Based on the training, we’ve given them more tools, so if there is an issue, like we have prescribed burns in an area, they monitor the road,” Rasmussen said.

State Rep. Keith Perry of Gainesville said neither he nor the Legislature can micromanage an agency such as FHP but added he is trying to keep pressure on it to ensure troopers and dispatchers are doing what they can to prevent a repeat of the tragedy.

“I am trying to be an advocate and keep pressure on to make sure they are doing things. I can try to be a consistent squeaky wheel in talking to them about the issues,” Perry said.

Meanwhile, FHP is also sending out more media alerts regarding roads that may be affected by prescribed burns or wildfires in particular areas. Other key agencies including the Florida Forest Service and the Florida Department of Transportation are also now sending out alerts on fires or traffic conditions via Twitter at @MyFDOT_NEFL and at @FFS_Waccasassa.

The FDLE report noted that FHP did not check with the National Weather Service for a LVORI — Low Visibility Occurrence Risk Index — forecast as it was supposed to do under policies started after the 2008 crashes.

Now, troopers are calling the NWS more frequently for information to help them assess dangers.

“They have been regularly calling in whenever conditions warrant it,” said meteorologist Pete Wolf, interim director of the NWS Jacksonville center. “There has been good collaboration between them and us.”

******
Experts say real safety improvements should come from the technology that DOT is starting to install to wire I-75 and U.S. 441 with signs, cameras and sensors and detectors.

To look at I-75 now, not much has changed since the crashes. Portable warning signs are placed at both ends of the prairie. An initial set of cameras has been installed and connected to the city of Gainesville’s traffic management system.

In the coming year, bigger changes are in store, said Gina Busscher, district spokeswoman for the Florida Department of Transportation.

DOT has $4 million for a project that will bring signs and detectors on I-75 and U.S. 441, the two primary north/south routes that cut through Paynes Prairie Preserve State Park.

Among them will be overhead dynamic message signs on which various alerts and warnings can be posted. I-75 northbound signs will be south and north of the Micanopy exit and the southbound sign will be south of the Archer Road on-ramp. Signs on U.S. 441 will be north and south of Paynes Prairie.

Television cameras will be installed on I-75 every mile from the Marion County line north through Paynes Prairie. The cameras will enable the city of Gainesville’s traffic management center to monitor the interstate for incidents, traffic congestion and road conditions. If problems are found, other agencies such as law enforcement and DOT can be notified.

Eventually, the DOT system will be linked to public safety agencies and the state’s 511 traffic traveler information system.

“The vehicle detectors will give us an idea of what the traffic speeds are. If traffic is traveling at only 20 mph, we know there is a problem,” Busscher said. “The visibility sensors will determine if there are vision obstructions like fog and smoke.”

Busscher said the anticipated start date is January 2014 with an expected completion date of October 2014. Much of the equipment will have to be manufactured to specifications for the roads.

The $4 million for the project was appropriated by the Florida Legislature after a statewide study in the aftermath of the I-75 crashes.

The University of Central Florida Department of Civil, Environmental and Construction Engineers developed a report for DOT that examined the effectiveness of systems that are in place across the U.S.

UCF professor Mohamed A. Abdel-Aty, who led the study, said DOT is installing all the technology available. By going with the total package — cameras, sensors, detectors — and linking them into a system that should instantly program the message signs and alert public safety agencies, the system will be as good as any in the country.

But while it will be the best available, it will fall on drivers to use the information that the system provides.

“DOT in this case has done its best to, No. 1, investigate the problem and the location of the problems statewide, and they put their resources to install state-of-the-art equipment on this particular segment of I-75,” Abdel-Aty said.

“Traffic is a combination of driver, road and vehicle,” he said. “We still depend on the driver, so what the state can do is provide all possible assistance in the form of detection, prediction, management and giving the driver the information. But the ultimate decision-maker is the driver.”