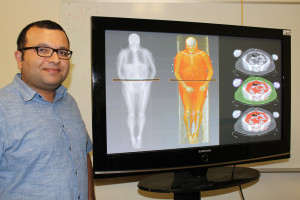 A UCF computer scientist has developed software to help doctors quickly determine whether what many assume to be an expected middle-age paunch is potentially more serious.

Since the 2009 discovery that adults also have brown – or good – fat cells that are beneficial in fighting off weight gain and can potentially slow cancer growth, scientists have explored ways to trigger the production of those cells, even stimulating the more common white fat cells to change color and function.

Ulas Bagci, assistant professor in the College of Engineering and Computer Science who works in UCF’s Center for Research in Computer Vision, specializes in using computer algorithms to rapidly analyze images such as positron emission tomography, magnetic resonance imaging, and computed tomography scans. His new technique puts the bull’s-eye on fat.

The software his team has developed not only differentiates between brown and white fat tissues, it distinguishes whether the more common white fat lives just below the skin in subcutaneous cells or deeper in visceral cells, potentially wrapping around organs.

It takes about a minute for the software to read results from PET and CT scans and, because the computer vision techniques can analyze the images much better than the human eye, gives doctors a more complete analysis than the images alone.

“These computer-derived results can help a doctor plan a treatment or surgery more accurately and much faster than before,” Bagci said.

The software also works with markers, such as contrast dyes, that can lead to an even more accurate understanding of the disease extent, severity and cause.

Bagci plans to make the software available to hospitals free. His team includes computer science students Sarfaraz Hussein, who is studying for his Ph.D., and Arjun Watane, a junior.

Bagci said his driving force is the prospect of using technology to directly help people and save lives.

“I was an electrical engineer, and I was always interested in going into medicine to understand how technology can help people,” he said. “Therefore I have chosen a biomedical imaging track to be specialized in for fulfilling my aims.”

After Bagci received his Ph.D. in computer science from the University of Nottingham in the United Kingdom in 2010, he was awarded a fellowship for the Imaging Sciences Training Program with the National Institutes of Health. He continued working there until 2014, ultimately managing the Center for Infectious Disease imaging laboratory at NIH.

While at NIH, in addition to working on vaccines for Middle East Respiratory Syndrome, Ebola, tuberculosis, swine flu (H1N1), and various cancers such as lung and kidney, he also began work with the nuclear medicine department of St. Louis University on obesity control. Just before he left NIH to join UCF, he was the leading imaging scientist for analyzing MERS, demonstrating how to design imaging and image analysis methods for vaccine development.

Bagci is also working on tools to detect and quantify lung, kidney, and prostate cancer and to quickly determine whether potential kidney-transplant donors are successful matches for patients in need, and alerting doctors in the early phase of potential cancer and functional disorders.

This article by Barb Abney was originally published July 28 on UCF Today.