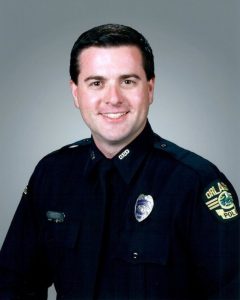 When the alarm goes off at 4 a.m., Harold O’Lena gets out of bed and prepares for his 15-hour day as a full-time police officer and part-time mechanical engineering student at the University of Central Florida.

O’Lena, 44, works anywhere from 40 to 60 hours a week for the Orlando Police Department while also forging ahead to complete his engineering degree, more than six years in the making.

“I feel like if I do not finish my degree, it’s a failure,” O’Lena said. “But failure is not an option; I have to do this. If I don’t, I will regret it the rest of my life.”

An Illinois native, the police officer traded his parka for flip flops and moved to Florida in 2001 after the long and cold Midwest winters began to take a toll on him.

O’Lena knew his associate’s degree in criminal justice wasn’t enough and went back to school for a bachelor’s degree. But to get into UCF, he needed to complete several required math classes — classes he hadn’t thought about since high school — and that’s when, 11 years ago, he stumbled upon his knack for numbers.

“To my surprise, I had some of the highest grades in my math classes so I continued to take on more challenging math courses,” he said. “That’s when other students started talking to me about pursuing an engineering degree. And here I am today.”

O’Lena completed his associate’s in engineering from Valencia College in 2010 and was accepted into UCF that same year. That’s when he began taking one to two engineering classes a semester to complete his bachelor’s degree, spending 10-20 hours studying on the weekend.

“Being in law enforcement is really demanding and means working on your days off sometimes,” he said. “I didn’t know if I could do the degree.”

Despite his bustling schedule, O’Lena carried his weight throughout the design and building phases of his team’s senior design project, showcasing his engineering skills like writing funding requests, researching and purchasing necessary equipment for the project, and assisting with construction and final testing.

“He was my go-to guy when I needed something done,” said Lincoln, who graduated in December. “It didn’t matter what I asked him to do, he was absolutely the person I could count on to complete a task for me.”

Persistence has paid off for O’Lena, who is completing his final two classes for the major and will graduate Thursday morning at the first of  six spring commencement ceremonies at UCF. He is among approximately 1,000 graduating with UCF engineering or computer science degrees.

It hasn’t always been easy for O’Lena, who notes the stress of the job can be difficult at times.

“The police work alone is stressful — dealing with high-stress situations and then having to immediately switch gears and go to UCF for a class or test makes for a long and stressful day,” he said. “I just have to find my balance. I keep pushing and looking at the end goal instead of how it makes me feel right now.”

As for his future, O’Lena plans to stay with OPD for at least another five years. Until then, he hopes to find a part-time computer aided-design (CAD) job to keep him fresh in the field and possibly pursue a career in the private space industry after more than 20 years in law enforcement.

O’Lena is already cranking out ideas of how to marry the two industries, such as a steering wheel desk that would provide the space necessary to complete police paperwork, with a spot for those pesky writing utensils that he said roll around inside his car.

“Being a police officer and a student has helped me build my confidence up,” he said. “I have the mindset of, ‘This is going to happen because I can do it. If I give up, what is the alternative?’”