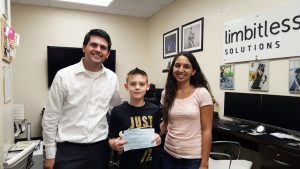 An 11-year-old UCF fan from small-town Indiana is making a big impact in the lives of others.

Nolan Shawl, a fifth grader and soccer aficionado, has raised more than $1,000 for UCF-based Limbitless Solutions, an organization that makes 3D printed bionic limbs for children. And along the way, he has discovered a passion for engineering, as well.

Shawl’s journey to UCF began in his hometown of Connersville, where his big heart and adoration for soccer stand out in the community of just 14,000 about an hour outside Indianapolis.

He first caught wind of Limbitless Solutions after watching a video of actor Robert Downey Jr. presenting then-6-year-old Alex Pring with a 3D-printed, Iron Man-styled bionic arm made by the organization.

“I like that they are using engineering to help kids live better lives,” said Nolan, who is more affectionately known to his parents, Darrell and Pam, as UCF’s biggest fan in Indiana.

With the help of his family, Nolan got creative and began raising money any way he could. He sold cookies at a local 5K, hosted several “paint-a-canvas” fundraisers with his classmates and members of the community, and sold nearly 400 pieces of candy last year.

His hard work paid off. In total, Nolan has contributed $1,150 to Limbitless Solutions since he began raising funds in 2015. That’s enough to provide three children with 3D printed arms in addition to a new art station for the organization.

“When he sets his eyes and heart on something he wants to do, he doesn’t quit until he achieves it,” Darrell Shawl said of his son. “He’s always put others first and is very humble.”

Nolan’s self-proclaimed hero, Manero, described Nolan as an incredible young man. The two first met in January 2016 after Manero invited Nolan to campus while he was in Orlando for a soccer tournament.

“He is working hard because he knows his actions and compassion can make the world a better place,” Manero said.

Nolan, who dreams of someday playing soccer and studying mechanical engineering at UCF, plans to charge on with his goal of raising at least $350 a year to help Limbitless Solutions provide arms to kids in need.

“His passion is inspiring other kids and our entire team and we are so grateful for his support and energy,” Manero said. “We can’t wait to see what he will dream up.”

Recently, the little boy from the Midwest celebrated his 11th birthday with a UCF-themed party and is eager to drum up support for the Knights among his friends.

For now, Nolan plans to get back on the field he loves so much and keep “kicking for causes” like Limbitless Solutions until he can one day join the team.

“When I get to UCF,” Nolan said, “I hope to work with Limbitless Solutions to keep helping people.”

To make a donation to the College of Engineering and Computer Science or to Limbitless Solutions, contact Robin Knight, CECS senior director of development, at robin.knight@ucf.edu to contribute. All donations will be made through the UCF Foundation, Inc. To learn more about Nolan’s efforts, visit his website at www.nolankicks4causes.com.