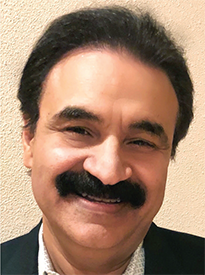 During his electrical engineering Master’s degree program research in VLSI design, Ankush Oberai designed an integrated circuit chip for UCF that was later manufactured. He was hired as a design applications engineer by NCA Corporation soon after graduating in 1983. Within six months he was promoted to a senior position and was responsible for working on IC chip designs with customers in U.S., Europe, Asia and Japan.

After six years at NCA, Ankush pursued his dream of becoming an inventor and entrepreneur. He joined a startup team that formed Knights Technology Inc. (Knights), a semiconductor software company. Its failure analysis software, “Merlin,” became the industry standard – with 98 percent market share in the semiconductor market. Merlin revolutionized the failure analysis market segment to a multi-billion-dollar industry due to its automation capabilities.

In 1995, Ankush invented a product which brought a new wave of manufacturing improvement in productivity and cost savings. The Yield Management product became an instant success and led Knights to a financial market exit in 1997 when it was successfully acquired by Electroglas Inc. (then a $500M company) and continued to grow there. Later Knights was acquired by FEI Inc. (a Philips company) in 2003. In 2006, Knights was acquired by Magma DA Inc. In 2012, Knights merged with Synopsys, a $2.5B company. Knights continues to grow under Synopsys and maintains market leadership.