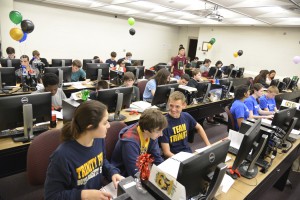 The University of Central Florida, home to a consistently top-ranked computer programming team, will play host Monday to hundreds of the state’s most talented high school computer science students.

It’s the 30th year that UCF will host its high school programming competition, also known as the “battle of the brains,” a four-hour contest that will bring nearly 300 students from 94 Florida high schools to the main campus in Orlando – adding to the more than 4,000 high school students who have competed at UCF in past years.

In hosting the competition, UCF has created a significant pipeline of high-quality students who go on to college, pursue a computer science degree, and eventually get high-paying technology jobs.

Recently Forbes ranked computer science as the nation’s second most valuable bachelor’s degree for getting hired. The four-year degree curriculum goes far deeper than teaching students how to code: it emphasizes the mathematical and theoretical foundations of computing.

“UCF has earned a magnet reputation in attracting high school computer programming competitors,” said Ali Orooji, a professor in the UCF Department of Computer Science and faculty advisor to the UCF  Programming Team who has run the high school competition for 27 years. ”High schools choose UCF to compete because of our unrivaled success record at the collegiate level.”

Last year, UCF placed 8th among U.S. teams and 28th in the world at the Association of Computing Machinery’s International Collegiate Programming Contest. Only 128 teams competed, representing the best of more than 10,000 regional teams from 101 countries and 2,534 universities. And for 33 consecutive years, a UCF team has placed in the southeast region’s top three.

“The students love this competition and they look forward to it every year,” said Gallagher. “UCF does a great job of focusing on the students. Dr. Orooji and the other faculty and volunteers just put on a very energized and organized event. Overall, UCF makes it a very fun experience for my students.”

Gallagher touts the competition as valuable experience for his high school students, who often leave the programming competition so impressed that they choose to attend UCF for college.

“Just to watch the growth of UCF’s College of Engineering & Computer Science in the past 15 years, and definitely the last 10 years, has been amazing,” Gallagher said. “I recommend to all of my students to go there. If you are looking to major in computer science in the southeast, I challenge you to find a better school than UCF.”

Margaret Roberts, a computer science and math teacher at Fort Pierce Central High School, agrees. She has been bringing her students to UCF’s high school programming competition for 27 years, and said that it’s because she believes UCF offers the best contest.

“I’ve had so many students go on to attend UCF through the years,” said Roberts. “When all of my students are filtering through, graduating, and getting jobs, I know that UCF is a good school and I continuously go back because of that,” said Roberts. “Over the years, I’ve watched UCF develop as a tech school – they’ve developed into a powerhouse university.”

That sentiment rings true for Elizabeth Briley, a freshman computer science major at UCF, who competed in the high school competition during her junior and senior years at Timber Creek High School.

“UCF’s high school programming competition really teaches you a lot about the thinking process behind programming and how to solve a problem,” she said. “It’s a great learning experience for those getting involved in computer programming and looking to advance their skills.”

Briley will be a judge at this year’s high school competition.

“The programming contest is really beneficial, regardless of what your skill level is,” Yamdagni, who participated in the competition throughout his four years in high school, said. “When I competed during my freshman year I wasn’t that good, but competing and preparing for UCF’s high school programming competition was an incredible opportunity for me because it really accelerated the pace at which I was able to learn programming, and it developed my ability to solve computer programing problems.”

Yamdagni, a member of UCF’s junior varsity programming team, will volunteer as a team guide at Monday’s competition.