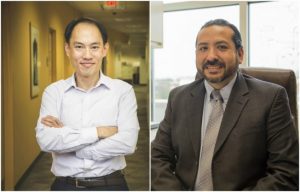 It’s part of a new SocialSim program from DARPA that’s been in the works for more than a year. The federal agency has contracted with nine teams from universities and research institutes across the country to gain a deeper grasp of social network dynamics. UCF was the only institution to have two teams funded.

The researchers are tasked with developing accurate and scalable simulations to provide DARPA with a better understanding of online social behavior and its evolution. Potential applications include countering the spread of misinformation by terrorists and malicious hackers, profiling online populations for social research, and forecasting online sales and activities for e-commerce.

“Different users take advantage of social media and other media channels to spread their ideas,” Chung said. “By accurately modeling and simulating such activities, our techniques will enable better understanding of such behavior and inform the development of policies and strategies.”

Garibay’s team will create and train thousands of AI “agents” to think and act like humans on social media networks. Garibay compared it to a hurricane prediction model, but instead of a storm’s path and speed, it would predict how far and how fast propaganda would spread on social networks.

“DARPA considers how information is propagating in social media an issue of national security. The core area of interest for DARPA is how foreign states can affect the opinion of people in the United States,” Garibay said.

The AI agents created by Garibay’s team have varied traits that govern how they would interact with one another online. Some are more emotional, some more rational, some more social, and together they will react like humans do on social media. When scaled up with the help of massive computing power, the AI network will be able to simulate how quickly information of different types will spread. Armed with a better understanding of propaganda propagation, researchers could potentially counter it more quickly.

“This will be like a test bed – a human-like network modeling with human-like behavior that replicates the phenomenon that occurs in real social networks,” Garibay said.

Garibay and his colleagues used a similar approach in earlier research, developing a model to determine what led to the population decline of the Anasazi people in the Southwest in the last millennium.

Chung’s team will develop a suite of models, tools and techniques to illuminate socio-behavioral properties and network interactions in large online populations. He will collaborate with co-principal investigator Elizabeth Mustaine, professor and chair of the Department of Sociology, who specializes in social theories, criminology and cyber stalking.

Chung, who is director of the Institute for Simulation and Training’s Cyber Intelligence Lab, has done extensive research on social media analytics, covering such topics as border security, e-commerce business intelligence and the spread of infectious disease. Mustaine has researched cyber bullying, and supervises graduate students to conduct this research.