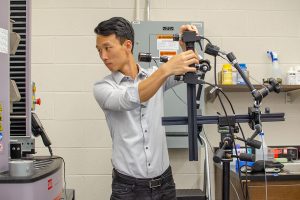 Deployable structures are those that can change their shape on command. Think of an umbrella, which uses mechanisms to change shape as a response to stimuli. Now imagine a spacecraft deploying a satellite with panels.

“Moving plants and insects change their shapes dramatically and rapidly to catch prey and take off from the ground,” says Kwok. “The mechanics behind it is quite complex but, if understood, has far-reaching applications for deployable space structures, robotics and even smart devices.”

Kwok and his team look at the diverse behavior of flexible structures and materials with micro-architectures, and to propose new designs by exploiting novel material and geometric characteristics. Through computational modeling, experimental characterization, and device fabrication, the group is unlocking the secrets behind the mechanics and creating new structures and materials with multiple functionalities, he says.

NASA is particularly interested in understanding the shape accuracy and structural characteristics of composite deployable reflectors and booms after long periods of packaging. That’s important when deploying satellites. Right now, the group is looking at the structure of antennas on space satellites in hopes of improving the antenna’s performance.

But space exploration isn’t the only application of Kwok’s work. His research not only dips into aerospace technology but also shape-memory polymers that react to certain stimuli through shapeshifting. This type of research can be used in wearable electronic devices and even seatbelts that absorb kinetic energy.

Kwok’s interest for shapes and how they bend, is only rivaled by his passion for teaching the next generation of engineers.

“As a faculty I have a team of graduate students with the freedom to tackle problems that are appealing to us,” he says. “This is the fun that keeps me going in the job.”

He has seen many students go on to land high-quality industry jobs they are truly passionate about.

“The biggest enjoyment is to see students became passionate in the same subject and decided to pursue an engineering career later on,” says Kwok. “It’s rewarding to be able to closely interact with students, witness their intellectual development, and be part of their formative years.”

Kwok joined UCF in 2017. He holds multiple degrees including a master’s and doctorate in aerospace engineering from the California Institute of Technology. His research area also includes flexible composites, high-temperature ceramics, instability and micromechanics modeling. Kwok has published numerous journal papers and was recognized with a 2010 NASA Tech Briefs Award. His students have also garnered awards including a 2018-19 NASA Florida Space Grant Consortium Fellowship.