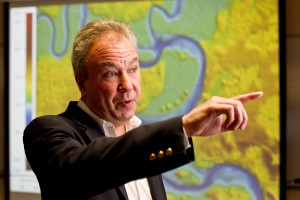 A UCF College of Engineering and Computer Science (CECS) professor is one of only eight scientists and engineers in the nation who has been asked to present findings Jan. 27, 2014 at the National Oceanic and Atmospheric Administration’s (NOAA) Science Day to educate the public about the potential impact of climate change.

Scott Hagen, a professor in the Department of Civil, Environmental and Construction Engineering, will talk during the “Advancing Climate Science for a Climate-Smart Nation” segment of the program that will include a webinar that scientists and policy makers can view.

“I think the fact that NOAA is holding this event is an indication of the emphasis at the highest levels that has been placed on climate change,” Hagen said. “This is an issue that is of grave importance to our state and beyond.”

NOAA’s goal is to understand, predict and communicate the planet’s climate, weather, oceans and coasts. Its mission is also to conserve and manage coastal and marine ecosystems and resources.

Hagen was selected for his many contributions to the understanding of climate change and its impact on sea level rise, which his numerical models predict will cause increased flooding and could lead to severe economic hardships. Recently he has been working on a NOAA-funded research project with an interdisciplinary team. The $3 million, five-year project began in 2010 and is looking into the ecological effects of sea-level rise in the northern Gulf of Mexico.

Other members of the research team are assistant professors Dingbao Wang and Stephen Medeiros from CECS, and professors Denise DeLorme, Linda Walters and John Weishampel from the College of Sciences. Other investigators from Florida State University and the University of South Carolina also contributed to the research.

Hagen’s team is one on several at UCF working on the impacts of climate change. NASA, the U.S. Army Corps of Engineers, the Kresge Foundation, the South Atlantic Land Conservation Commission, the National Park Service and the water management districts of Florida have all funded UCF projects in the area of climate change.

Hagen has made several contributions and works with several agencies to get a better understanding of what sea-level rise could mean and how to prepare for it. For example, he leads a team that includes UCF graduate students working in conjunction with industry and government counterparts to develop coastal inundation models in direct support of Federal Emergency Management Agency flood-plain mapping for the Florida panhandle and the Alabama coastal areas and participates on the FEMA team covering the east Florida and Georgia coasts. Results from the models that his team is developing will ultimately determine FEMA digital flood insurance-rate maps, which will play a substantial role in defining how Florida coastal regions will be developed.

CECS has recognized the importance of this area of research and created the Research Cluster of Excellence for Interdisciplinary Studies on the Coastal Dynamics of Sea Level Rise. UCF is also a member of the Florida Climate Institute. Hagen is the branch co-director of the institute along with Reed Noss, a biology professor in the College of Sciences, who has also made contributions to the area of climate change research as it pertains to ecosystems and wildlife.

“I think it says a lot about the level of contribution we are making at UCF with respect to global climate change,” Hagen said. “This opportunity to present says to me that UCF is making a nationally recognized contribution to global climate-change research and I’m honored to be representing our university.”

Hagen received his Ph.D. in civil engineering from the University of Notre Dame in 1998. He joined UCF in 1997 and is a registered Professional Engineer with the State of Florida. Hagen is a member of the board of governors for the ASCE/Coasts, Oceans, Ports and Rivers Institute and served as chair of the Coastal & Estuarine Hydroscience committee.

In 2012 he chaired and hosted the 10th International Conference on Hydroscience & Engineering, where he was recognized for outstanding achievements in his field. He is also the author of multiple academic articles including a focus issue on the “Implications, Planning and Design Considerations for Rising Sea Levels at the Coast,” which appeared in the Journal of Waterway, Port, Coastal and Ocean Engineering.